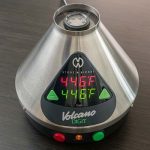 Despite being over a decade old, Storz & Bickel‘s Volcano is vaporizing royalty and can possibly claim the best reputation of any vaporizer on the market today.

Unfortunately, it would be many years before I was reunited with the vaporizer due to its price tag. However, I received one as a gift 3 years ago so I thought it’d be worth me getting round to reviewing it!

👍 The vapour quality of the Volcano is unrivalled

The Volcano vaporizes cannabis by convection which guarantees zero combustion. This is vital if you have switched to vaping for health reasons.

oven produces the thickest clouds of any vaporizer I have ever used, it really is miles ahead of its competition.

Not only are the clouds satisfyingly dense but they taste great too. The Volcano Digit is the vaporizer for any cannabis connoisseur. Using this vaporizer I was able to pick out individual flavour notes and recognise a strain by taste alone for the very first time.

Finally, because the clouds are so dense and filled with cannabinoids your sessions can be incredibly short! I actually use less weed when I use the volcano.

👍 The Volcano’s engineering is exquisite.

The Volcano Digit is pyramid shaped and almost impossible to knock over – something that gives me peace of mind when leaving the expensive bit of kit unattended when I have a group of friends over.

The Volcano’s entire body is constructed out of thick aluminium and just by holding it you can see that its quality is stereotypical of German engineering. I’ve had mine for 3 years now, have used it at least once a week and there has been no change in its performance.

The Volcano is unique for its various electrical certifications (DIN EN ISO 60 335 and has been tested and certified by TÜV SÜD (the “Southern Technical Inspection Association”) in Munich, Germany.

Thanks to its medical grade components it also as an official medical device in Canada and Israel.

It’s safe to say the Volcano is a vaporizer whose quality, robustness and performance you can be confident in.

👍 The Volcano is incredibly easy to use

The Volcano Digit’s shape, its heft and all the accessories it comes packaged with can render it intimidating for someone new to vaping cannabis. However, looks are ; it really is a joy to use.

There are various methods of using the Volcano but for I tend to stick with the easy-valve system.

It can be used in just 5 easy steps.

A session with the volcano typically lasts me about ten minutes and you can expect each bowl to fill three and a bit of balloon.

I find the first balloon tastes great, balloon 2 and 3 will f*ck you up. The half bag at the end is quite weak; save that one for your friend. 😉

Cleaning and maintaining the volcano is fairly straightforward too. The only part that needs any attention is the screen that sits above your bud in the bowl – it can get clogged up quite quickly. If you remember to clean it as you go it should cause no problems at all.

Two things about the Volcano Digit I didn’t like

❌ The Volcano is bloody expensive

state the obvious. The Volcano is bloody expensive! I suggest before spending a sizeable chunk of a holiday abroad that you are really sure you will use the Volcano Digit enough to get your monies worth.

If you’re a serious vaporizer or you just enjoy vaping with friends and you have the cash then isn’t just a no brainer – it’s perfect.

❌ The Volcano is loud

The Volcano is far noisier than I expected! To fill the balloon, the requires a fan to push the hot in. This fan is quite noisy. I like to get high whilst getting lost in a good film. That’s quite hard to do when you’ve got a fan blowing in your ear!

So is the Volcano still the best Desktop Dry Herb Vaporizer in 2019?

Yes – In terms of performance, reliability and longevity, I can confidently say that the Volcano Digit is still one of the best dry herb vaporizers in the UK.

It may have a sizeable price tag but this is an investment that will pay dividends: firstly because it will last you years, secondly, because you’ll use less week.

You can buy the Volcano Digit Dry Herb Vaporizer and be confident that your money is being well spent!

See all of our best reviewed vaporizers here