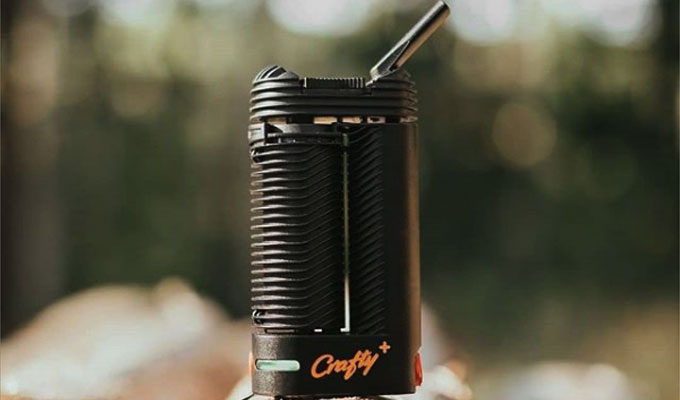 You don’t have to spend very long to on this website to conclude that we are all massive fans of pretty much everything Storz & Bickel do.

As far as I’m concerned the Volcano is the best vaporizer in the world and the Mighty runs it a close second.

However, a criticism levied at both these devices is that they are both not very portable.

The Crafty is Storz & Bickel’s answer to this criticism. It’s aim is to offer the same god-tier vaping experience as the Mighty despite being half the size.

Does the Crafty live up to its billing? Let’s find out!

The best prices for the Crafty can be found at:

Three things I love about the Crafty+ Plus Vaporizer

✅ The Crafty+ Plus has hybrid heating.

Just like the Mighty, the Crafty boasts hybrid heating. This is a massive advantage over similarly prices vapes such as the Pax 3 and Zeus Arc GT.

A typical vaporizer will implement conduction or convection.

Conduction ovens heat by direct contact. They have the advantage of providing thick vapour but can sometimes not heat efficiently.

On the other hand, convection ovens heat by creating an atmosphere of the hot air which in turn heats your cannabis. This has the advantage of heating your weed evenly but it can take minutes (rather than seconds) to reach vaping temperature.

By implementing conduction and convection, the Crafty’s oven cancels out the disadvantages of both methods whilst retaining all the advantages.

The result is smooth and tasty vaping sessions that rinse every last cannabinoid out of your cannabis.

✅ The Crafty+ Plus has an air-cooling system.

Quite often a vaporizer’s oven will have to reach temperatures north of 200c to cause cannabinoids to evaporate. Unfortunately, when vapour is this hot it can result in harsh tasting vapour and mild throat burn.

Inside the air cooling unit are special ridges. Before the vapour reaches your mouth they are forced over these ridges. This has a cooling effect on the vapour.

If you really enjoy tasting the individual flavours of different strains then this vaporizer was designed for you. The Crafty produces the crispiest and tastiest flavours of any vaporizer its size.

✅ The Crafty+ Plus has a great smartphone app

One feature the Crafty has over the Mighty is its ability to connect to your smartphone via Bluetooth. The app is available for download on Android and iPhones.

Just like the Pax and Davinci, the Crafty’s app is an example of connectivity done right.

The app boasts a plethora of features but generally, I used it to change the pre-programmed temperatures in your Crafty and set your phone to vibrate when it’s time to vape.

These two features alone make the app a must download.

One change I would make to the Crafty+ Plus

When Storz & Bickel first teased the fact that they were about to release a new weed vaporizer it caused great excitement within the vaping community and several of us began to make wild predictions on what new technology would be implemented.

Unfortunately, the Crafty+ Plus was a bit of an anti-climax. It looks pretty much exactly the same and is definitely more evolution than revolution.

This isn’t necessarily a disadvantage however because the OG Crafty was (and is) such a good cannabis vaporizer – it would have just been nice to see Storz & Bickel push the market forward as they have done in the past.

Instead, Storz & Bickel have tweaked the original designed and to be fair the Crafy+ Plus does offer improved performance.

The first thing you’ll notice is the revamped battery. The original Crafty offered 6 sessions of a single charge if you were lucky. The Crafty Plus almost doubles this and offers at least 10/11 sessions out of one battery charging cycle.

Also, I noticed an improved vaping performance. Storz and Bickel have claimed this is due to the improved circuitry but from what I can tell, the air-flow has been improved too.

So, is the Crafty+ Plus a portable Mighty?

Due to its size, it may lack the power of its bigger brother but in terms of vaping quality, the new Crafty+ Plus comes pretty damn close!

Both devices offer similar high-quality vaping experiences that other brands can not replicate. The Mighty’s advantage of over the Crafty is raw power and bigger hits.

However, if you value portability, then you will not regret choosing the Crafty over the Mighty.

Finally, I think the Crafty also beats its similarly priced competition. It may not have the bells and whistles of the Davinci IQ or Pax 3 for example, but as a vaporizer, it offers the superior experience.