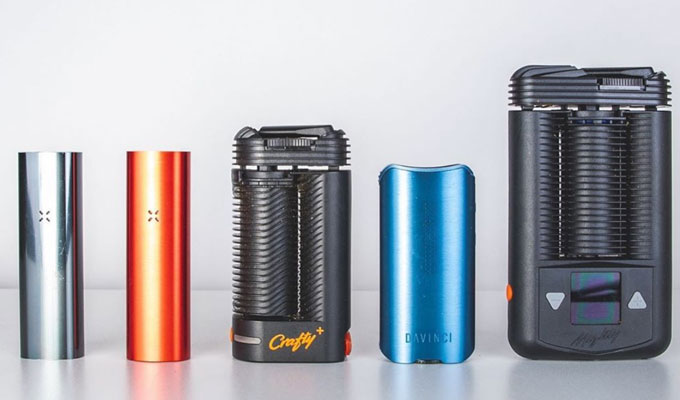 What are the best dry herb vaporizers in the UK?

I gave up smoking cannabis nearly a decade ago when vaping was in its infancy and haven’t looked back since. Back then, you only had a choice of one or two vaporizers and you had to import them from Europe or America. Now the UK is inundated with dozens of different models of dry herb vaporizers. This can make choosing the right one quite difficult. To help make your search easier I thought I’d share some of the best weed vaporizers available to buy in the UK right now.

If you’re in the market for a cheap vaporizer, check out our Best Cheap UK Weed Vaporizers guide.

If there was an award for aesthetics, anything created by Pax would be head and shoulders above the rest! The Pax 3, however, is more than just a pretty face; it packs a lot of power and technology under its brushed aluminium hood too.

Looks aside, there are three reasons the Pax 3 is my pick of the bunch :

Generally, The Pax 3 provides great taste and a good level of vapour. This is due to the air path being quite long so the vapour has time to cool down before it reaches your mouth.

The Pax 3 may not boast the changeable battery of the Ghost MV1 or match the heat the 5-second heat up time of the Firefly 2 but it doesn’t have the price tag either! The price starts at just £168 which is a fraction of the money you’ll be set back purchasing a flagship vaporizer from Ghost or Firefly.

In my humblest of opinions, the Pax 3 offers the best combination of price and performance.

Best Overall Dry Herb Vaporizer: Firefly 2 – A great vape with great technology but it’s the price tag of over £200 puts it out the price range of many vapers.

If you’ve been to Amsterdam, you’ll recognise the famous cone-shaped vaporizer inside pretty much every reputable coffee shop. Simply put, the Volcano is most people’s first experience with a desktop vaporizer. This is bad news for their competition because after using the Volcano, you’ve already used the best.

My Volcano is now maybe three years old and still works like it is brand new; it is clearly very well engineered.

The Volcano utilises a vacuum system that pumps air into the system. This air is then heated to a temperature that evaporates the cannabinoids in your cannabis which in turn, fill your balloon. One your balloon is full of air you can detach it from the device and enjoy the vapour.

The only disadvantage to the volcano is maintenance – you have to buy replacement balloons. This will probably cost you another £30 / £40 per year.

Runner Up Best Desktop Vaporizer: Volcano Classic – This is the previous model and it works just as well. The only features it is missing is a digital display and an auto shut off timer. It’ll save you £100 too 😉

As its name suggests The Flowermate Hybrid X is possibly the most versatile vaporizer I’ve ever used. It’s the perfect choice for anyone who enjoys liquids, wax and oils as much as their herbs.

Because it has a 510 thread atomizer tank it looks like a typical mod for E Liquids. However, if you remove the tank and turn it upside down, the body has a secret compartment for vaping weed too.

You just pop open the body and you can slide out the glass mouthpiece and fill the oven with herbs. Furthermore, it comes equipped with special chambers for wax and oils too – it really is a true all-rounder.

The dry herb experience with the Hybrid X is top-notch. Its mouthpiece is made from borosilicate glass that whilst fragile, is hands down the best material for conduction vapour so it tastes great. The oven is a powerful ceramic oven that’ll produce vapour in under a minute and you can also pop in specially fitted chambers into the oven that you can fill with wax or thick oil.

Flipping the vape around and screwing in the tank and you’ve turned your dry herb vaporizer into a mod that’ll produce humongous clouds from vapour instantly when you press the button.

The only disadvantage I can think of for the Flowermate is that it does come with a lot of parts. It leaves me apprehensive to take it on travels with me in case I lose a chamber or mouthpiece.

Runner-Up Hybrid Vaporizer: Flowermate Aura – 80% of the Hybrid Experience for 50% of the price sums it up nicely! The Flowermate Aura has the same quality ceramic chamber and oven as the Hybrid but it does lack an atomizer. However, it comes with nifty chambers you can insert into the oven which is compatible with wax, oils and liquids.

Best Dry Herb Vaporizer if money is no object – The Mighty

The second entry from Storz & Bickel. If you can afford it, the Mighty was the daddy of portable vaporizers in 2019 and I can’t see that changing in 2020.

The only reason I do not carry the Mighty everywhere I go is that it’s a tad too big; if the Volcano is a tablet and any other portable vaporizer is a smart-phone, the Mighty is probably a ‘phablet’.

One of the biggest advantages of the Mighty is that it boasts a Hybrid heating system which makes the use of convection and conduction heating. This produces the thickest vapour out of any vaporizer I’ve ever used and reaches maximum temperatures really quick too. I’d argue that the Might provides clouds that can only be matched by a desktop vaporizer.

Another plus point is its battery. On my last cycle with the Mighty, I counted 9  10 minute vaping sessions before the battery went dead which great and as a bonus, it has pass-through charging which means you can use it plugged into the mains whilst its charging – so the fun doesn’t have to stop!

Finally, the Mighty is super easy to use. Most vaporizers take a while to get the hang of, especially when you’re new to vaping but the Mighty just works.

If you can afford it and you prefer power over portability then you can’t go wrong with the Mighty.

Runner Up ‘All the monies’ Vaporizer: The Ghost MV1 – This was very close. Ghost fairly new on the scene and have impressed with their first vape. This vape is pretty pricey too (£265) but its packed full of power and technology. Ghost as definitely a company to watch in the future.

The Best Affordable Vaporizer (Under £100) – The niiceOne

Wow – the niiceOne is a refreshing surprise. Not only does it look great ( a bit like the Pax, only with a screen) but it packs a performance too!

Its body packs a powerful 2,300mah battery which is more than enough for a day’s vaping.

On top of this, it has a touchscreen that allows you to control the temperature in 1c increments and a haptic feedback motor that lets you know when your herbs are ready to be vaped.

All of this is packed into a tough but sleek aluminium shell and boasts two mouthpieces; a flat and a raised one.

All for 69 quid! The niiceone is my favourite to carry to festivals as I know it is robust enough to take a good knock and it isn’t the end of the world if I lose it. £69 is a lot of money to me but I’d still rather lose this than my £300 Mighty!

Runner Up: Black Mamba  – The Black Mamba has a food-grade, glass mouthpiece, ceramic oven and produces vapour from cannabis in around 15 seconds. Did I say it costs less than £40?!

Non-battery powered vaporizers were new to me but I can see it catching on. I mean, I love vaping but sometimes I do miss the ritual of rolling up with some friends and using a lighter. The Dynavap M 2020 brings some of the rituals back without filling your lungs with carcinogens!

I’ve only used one other non-battery vaporizer before and it was a chore. It was difficult to know when my herbs were ready to be vaped so it sits on my shelf collecting dust.

The Dynavap M however, has a nifty innovation. It has an inbuilt thermometer that produces an audible click when your herbs are ready and then will click again when it needs to be reheated – it’s really clever and really simple.

If you’re a bit of a pyromaniac and enjoy using a lighter and watching the flame, you’ll enjoy a Dynavap. Personally, I’d argue a non-battery vape is nice as a companion to your main vaporizer. However, that’s just my opinion of course! Whatever floats your boat.

Runner-up Non-Battery Vaporizer: None – I have yet to come across another non-battery vape I’d happily recommend.

Best Pocket Vaporizer – The Crafty+ Plus

Honestly, I am not affiliated at all with Storz & Bickel. However, they really do deserve their third entry in the best vaporizers of 2020 list! Everything that comes out of their factory is pure dynamite!

Earlier we said if you can afford it, The Mighty is the best vaporizer that money can buy.

Despite its tiny size, it has the same hybrid heating and vapour cooling system as its bigger brother – It’s vapour production is second to none.

Finally, it even has a feature the Mighty does not have; Bluetooth connectivity!

You can sync The Crafty+ Plus up with your smartphone which will add further customizability to your vaping experience by editing the temperature settings, auto-shutoff and boost mode.

The biggest complaint of the OG Crafty was its less-than-average battery life. Obviously, Storz & Bickel listened; the year’s Crafty+ Plus fixes that and then some! The previous Crafty provided just 5-6 sessions from a full battery. However, with the Crafty+ Plus, you can expect to squeeze 10 sessions out of a single charging cycle. This is more than enough juice to last at least a couple of days for most people.

Buy the Crafty+ Plus Vaporizer UK

The first thing you’ll notice about the Black Mamba is its aesthetics; it should be criminal for a vaporizer this cheap to look so good.

However, a vaporizer’s looks count for very little if it either doesn’t perform or falls apart easily.

Fortunately, we can report the Black Mamba delivers on both.

Despite its low price, its engineers have used quality materials. Its case is made of a tough, heat-resistant plastic that feels great in your hand – it is very ergonomic.

Its air-path is also made of laboratory-grade glass. Glass is the best material for conducting steam.

It also performs really well too and is super easy to use. Its conduction oven is powered by 1600mAh battery that’ll heat your herbs in under 20 seconds flat; unprecedented for a vaporizer of this price.

If you’re looking for a first time vape or even a ‘throw-away’ vape to accompany you on a festival, you can’t go wrong with the Black Mamba. Easily the best performing dry herb vaporizer available in the UK today.

Buy the Black Mamba with a 10% discount @ dank!

The best convection vaporizer – Firefly 2 Plus

Convection heating was supposed to be the next big technology in the world of cannabis vaporizers. Unfortunately, technology hasn’t lived up to its premise.

Theoretically, convection heating is supposed to offer maximum extraction from you bud whilst guaranteeing no combustion and offering better flavour.

After two months of heavy use, I am pleased to report that The Firefly 2 Plus is a great example of convection heating done right. It offers on-demand heating, producing vapour within 3 seconds (!).

Most impressive is the quality of the vapour. I’d rate the smoothness and flavour of the clouds produced second only to the Mighty and Crafty, which are the creme de la creme of dry herb vaporizers.