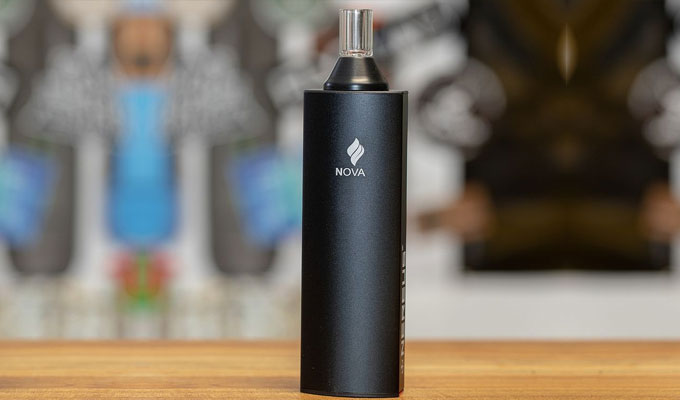 I really love my Mighty and Pax 3. However, when I’m out and about I sometimes like to take a cheap vape out with me in case I lose it. Cheap vaporizers are also a great choice for someone trying out vaping weed for the very first time.

I don’t expect an affordable vaporizer to have the perfect performance. Instead, all I want from a cheap vape is for it get me high, whilst tasting nice and without exposing me to any toxic fumes.

My favourite cheap vaporizer is the Black Mamba. However, I’m always on the hunt for a vape that’ll beat it which is why today I’m reviewing the Nereus Nova.

Atman, the owners of this brand market the Nereus Nova as a ‘premium vaporizer’ which are big claims for a vape that only costs £40. Let’s find out how accurate this is!

What I liked about the Nereus Nova (Atman Starlight v2)

👍 The Nereus Nova has a clean pathway

Unfortunately, there are many cheap vaporizers that are no healthier for you than smoking. The Black Widow is a perfect example of this.

Cheap Chinese vaporizers are notorious for either containing plastics in the oven or drawing in air over the electronics. This is dangerous because it can result in the user inhaling toxic fumes.

After a brief inspection, I was pleasantly surprised to find that the airpath appears to be totally free from plastics and toxins.

As an added bonus, the mouthpiece is glass too – which is a great material for flavour.

For some reason, the Nova’s buttons and LED screen is on the bottom of the vaporizer – more on that later… This renders them useless unless you’re holding it upside down.

Fortunately, the Nereus does offer some consolation; it vibrates to indicate when it is time to vape.

To be honest, I’m stretching a little bit. This isn’t necessarily a good thing… it just helps to fix the bad design!

❌ The design of the Nereus Nova is terrible

I think that the Nereus Nova was designed by someone who has never used a cannabis vaporizer in their life.

As I mentioned previously, both the screen and the temperature buttons are on the underside of the vaporizer.

This means you can’t tell what temperature the vape is at when it’s sat on a table for example. Also, it’s very easy to accidentally change the temperature without meaning to.

❌ The Nereus Nova’s temperature control is not accurate

I didn’t have the time to take the vaporizer apart and find out for sure but I’m fairly certain there is no true temperature control.

However, I did use my electric thermometer and that told me the Nova’s oven was at just 170°c when the vape was telling me 200°c this is a massive difference, especially if you’re a medical user.

Instead of having an internal thermometer, the vape has a preset setting for each temperature. This does not work because batteries operate very differently depending on how full they are charged.

❌ The Nova’s oven is very weak

The oven is weak. Very weak.

Typically, I had to wait 30 seconds after the device reached its vaping temperature to actually take a hit.

I also had to wait another 30 seconds between each hit as even a shallow inhalation would decrease the oven’s temperature significantly.

❌ The Nova’s air-path is quite restrictive

If you’re looking for thick and satisfying clouds you’re probably looking at the wrong cannabis vaporizer.

I think this is due to the minuscule air holes in the oven and the mouthpiece having a tiny diameter.