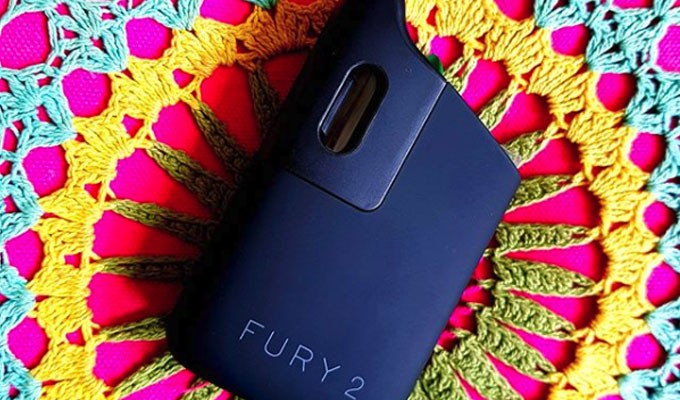 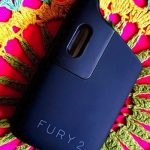 No, you’re not suffering from deja vu; the Fury II is actually the same device as the POTV One minus a few features and a smaller price tag as a result.

Still, the Fury II has everything you’d expect from a £115 dry herb vaporizer; it looks nice, has accurate and precise temperature control

As such, to prove its worth, I think the question we need to answer today is ‘can the relatively unknown Fury II compete against the big guns’?

If you’re in the market for a £100-£150 vaporizer, it’s worth checking out my Davinci Miqro and Boundless CFX reviews. You can also find out which vaporizers make it into my favourite dry herb vaporizers HERE.

What do we love about the Fury 2 vaporizer?

The Fury 2 is super portable

The first thing you’ll notice about the Fury II is how small it is, you can literally hide it in your hand!

It is one of the industry’s most portable vaporizers and measures just 8cm tall. In comparison, the Davinci Miqro is also 8cm and the Pax 2 is 10cm.

Due to its size, its oven only holds 0.15 grams making it the perfect little buddy for those who like to vape solo whilst on the go!

You’d be wrong to assume that because the Fury II is so small that it would have to make sacrifices on the quality of hits. This vaporizer can produce pretty big clouds, especially at higher temperatures!

The taste of the vapour is above average too and on a par with the Miqro and Boundless CFX. You can expect 15 hits from 1.5 grams of herb. The first 5 taste especially good but it does quickly deteriorate towards the end but this is not different from most other vapes in this price range.

Unlike most vaporizers of this size the draw resistance is pretty low so inhaling thankfully feels as good as it tastes.

The Fury 2 has genuine hybrid heating

Conduction vs Convection is an age-old battle and both heating methods have their fans and detractors. The

I’m always sceptical when dry herb vaporizers pitch themselves as offering hybrid heating because the majority are not and do not come close to experiences provided by the true hybrid vapes; the Mighty and Crafty.

I was pleasantly surprised to find that the Fury II was actually hybrid heating, though heavily slanting towards conduction. Still, this explains why the device can produce big clouds and taste so good.

The Fury 2 is incredibly easy to use

Being easy to use is a feature that is greatly overlooked when people are trying to decide on a vaporizer. Some vaporizers are not innovative and actually difficult to operate (DaVinci IQ) whilst actually using some vaporizers takes a technique to pull decent hits from.

Similarly, to the Pax 2, the Fury II is literally a case of ‘pick up and play’. It is so easy to use, I won’t even bother covering how to use it!

As I mentioned previously, draw resistance is just at the right level so no special technique is required. My only advice is to not pack the oven too tightly.

Features of the Fury 2 that I did not enjoy

The Fury 2 has a short battery life

All ultraportable vaporizers must make a sacrifice in order to compensate for their small frame. Just like the Crafty and the Davinci Miqro, the Fury 2’s battery life is pretty poor.

It has a 1,600mAh battery (same as the £30 Black Mamba) which provides only 40 mins of oven time – the Pax offers almost double this! What’s worse is that it takes twice as long to charge!

The Miqro is able to redeem its poor battery life by offering replaceable batteries. Unfortley here, the Fury II falls short. In the short term, this means that you must always carry a charger for you. Long term, it means when your battery has died, so has your vaporizer.

The Fury 2 does not look or feel like a premium dry herb vaporizer.

Compared to its peers, the Fury II looks and feels cheap. Both the Pax 2 and Miqro are almost works of art and feel like quality too. Personally, the Fury 2 doesn’t hold up here, rather than the brushed aluminium of the Pax and Davinci it has a rubber coating and a plastic mouthpiece.

Verdict: Is the Fury 2 as good as the Pax 2 and Davinci Miqro?

The Fury II only falls short aesthetically. Maybe I’m vain but if I spend north of £100 on a vaporizer I want it to look and feel like it!

However, if you don’t care about a pretty face and your judging solely on performance then you can’t go wrong with the Fury II.

Balanced on vapour production and taste, It offers a slightly better vaping performance than the Pax 2 and is on a level with the Davinci Miqro.