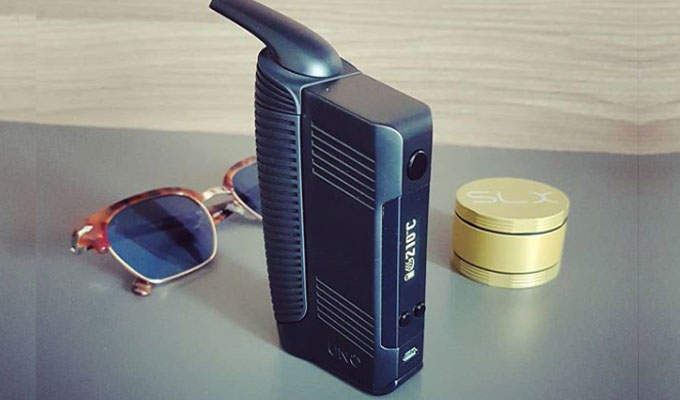 Flowermate has built a reputation for creating some of the best vaping experiences for those on a shoestring budget.

The Flowermate Uno is the first vaporizer of theirs that is being positioned as a ‘mid-tier- vape rather than a cheap vaporizer. In this review, I’ll be comparing a Flowermate product to some of the biggest, respected names in the industry such as Boundless, Arizer and Pax. Can Flowermate step up alongside such illustrious competition?

As of summer 2019, the best price I could find was at Magic Vaporizers where you can purchase it for £125.

👍 The Flowermate Uno has replaceable batteries

Take heed vaping companies: replaceable batteries are a feature that all vaporizers should come with. I really hope it becomes standard for two reasons:

However, these batteries are propriety and Flowermate is a Chinese company so good luck finding spares!!

The entire range of Flowermate products is known for their versatility; they vape pretty much everything and do so really well. The Flowermate Aura and Hybrid X are two of the most popular multi-purpose vaporizers so it is no surprise that the Flowermate Uno can comfortably handle herbs, liquids and concentrates alike.

The Flowermate Uno’s oven also covers a wide range of temperatures. Using the controls and LED screen you set the temperature of the oven to anywhere between 60°C and 260°C. This is great if you do actually vape any dry herbs other than cannabis!!

I would describe the quality of vapour produced from the Uno as just satisfactory. The oven does indeed have some power and begins produces vapour in under 30 seconds.  The clouds produced are dense and thick. Most vaporizers have a learning curve but you can pick up and puff away with the Uno with no effort at all.

However, after spending £125 I’d expect something more. Unless you attached the water-pipe (which is cumbersome) there is no cooling element and the air-path is short. This results in a harsh vapour that lacks in flavour.

The vapour quality isn’t bad, it’s just very It’s a similar vape quality to the Flowermate Aura – but that device only costs £50!

❌ The Flowermate Uno has a small battery

This is my biggest gripe with this device. For some reason, Flowermate decided to go with a proprietary battery instead of the high capacity 2,700mah Samsung batteries they use in their cheaper vaporizers.

Also, it provides just 30 mins of heating time which is terrible for a vape designed to be portable. Finally, despite the battery being so small it still takes a massive 3 hours to charge.

Beauty is in the eye of the beholder but I  don’t think anyone will argue that the Uno looks as nice as say the Pax 2 or the Miqro. It’s plastic and metal shell makes it quite heavy too. Pretty it isn’t!

Can Flowermate be Numero Uno amongst Mid-Tier Vaporizers?

As much as I love Flowermate products, unfortunately, the answer is a firm no.

I consider the mid-tier category of vaporizers to be those priced between £100 – £150 quid. This means the Flowermate Uno is competing with the likes of Boundless, Davinci, Pax and Arizer. However, when you place it next to these household names it just does not stack up.

If you want a great vaporizer and only have £50 to spend, Flowermate is probably the vaping brand for you. However, if you’re stepping up to a serious product, for now at least, I suggest sticking to the bigger brand names.

Find out what our favourite vaporizers are here