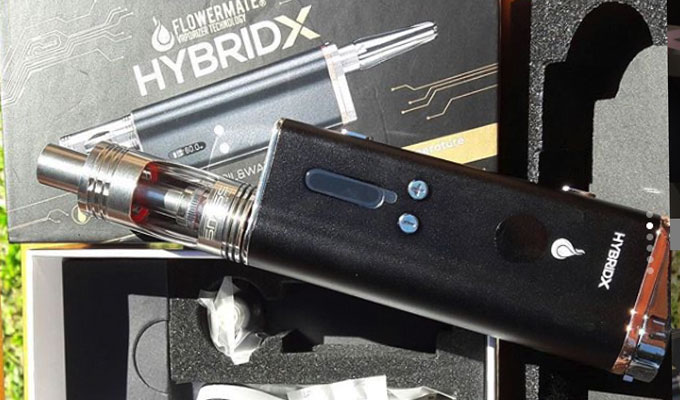 The Flowermate X is a popular hybrid vaporizer that has made waves for its ability to vaporizer cannabis in any form.

The Hybrid X is popular across Europe where it is popular to roll weed with tobacco. With the Hybrid X, you can vape your weed from the dry herb end then flip it around and enjoy a nicotine hit from the E-Liquid end – it really is an ingenious design.

As many vape enthusiasts will know, vaporizers that claim to be hybrid typically involve some sort of sacrifice. They either vape herbs really well or concentrates/was really well; rarely both.

Because the Flowermate Hybrid X claims to vape everything well with no compromise we thought we’d put it to the test.

For the dry herb oven, the Flowermate Hybrid X uses their standard ceramic chamber that’s been made famous across their entire range. It’s favoured for its ability to reach high temperatures whilst being able to guarantee no combustion. As a result, the taste is pure but towards the end of the session it can taste a bit dry.

👍  The Flowermate Hybrid X vapes everything!

As we’ve already mentioned, many vaporizers that claim to be a hybrid are normally found wanting. It was a nice surprise that the Hybrid did actually vape all materials just as well in our test.

We used it with 0.2grams of UK Cheese bud, hashish and some CBD E-Liquid.

Next up was the hashish. You vape concentrates in the same end as the dry herbs the only difference being that you have to use the little pop provided. The pod slips perfectly into the oven chamber, almost like a glove. I found that temperatures below 190c were pretty useless but ramping it up to 210c the hits were great! I had to take a break!

Finally, it was time to test the Hybrid’s game-changing feature; the 510 port. This turns your dry herb vaporizer into an actual box mod as it is compatible with most atomizers and tanks down to 0.2Ω. I used the Smiss SubX Tank provided in the box and it worked great.  You set the wattage using the screen Next, press the button on the side and big, thick clouds are produced instantly!

👍  The design of the Flowermate Hybrid X is ingenious

A of thought and attention has been put into the look and feel of the Flowermate Hybrid X. It is one hell of a vaporizer. From the ceramic heating chamber to the stainless steel pods, the entire thing is made only out of medical grade components.

Both the SubX Tank and the dry herb mouthpiece have been fashioned out of borosilicate glass. This type of glass is widely known as one of the best materials for conducting flavour. The Smiss SubX tank is also ergonomically designed, features heat dissipation and is 100% leak free.

Its body hides secret compartments that prove to be handy for carrying around the unused mouthpiece or even an extra stash you’re saving for later.

It’s a wonder they fit that in because the body is tiny and therefore very discreet. Without the screwed I don’t think anyone would even recognise it as a vaporizer at all!

What I didn’t like about the Flowermate Hybrid X

The Flowermate Hybrid X comes with a lot of parts. In fact, let’s add them all up: the vaporizer itself, herb pod, wax pod, glass mouthpiece, atomizer. That’s a lot to carry around and it’s easy to lose track of what you have with you making bits easy to lose.

Even switching from the dry herb vape to the E-Liquid end is a bit of a chore. You have to remove the mouthpiece at one end to out in another one at the other.

Because of this, I don’t really leave home with the Flowermate Hybrid X unless I know for sure I’m vaping either herbs or liquid.

❌ Glass tastes great but is fragile!

As I mentioned borosilicate glass is the best material for conducting vapour however it is also incredibly fragile! If you drop the mouthpiece from any height, expect to have to buy a new one!

In Flowermate’s defence, however, you can unscrew the glass and place it in the compartment whilst you travel – this does keep it safe.

So is it Hybrid in name and nature?

If you used the Flowermate Hybrid X for dry herbs only it would vape them as good as any vaporizer in its price range.

Conversely, if your plan is to use the Flowermate Hybrid X for dry herbs only it would vape them as good as any vaporizer in its price range.

However, you used the Flowermate Hybrid X as an e-liquid box mod it would perform just as any box mod available.

Thought it does has its faults, it really is a great vaporizer and its perfect for a cannabis enthusiast is vapes herbs in many forms.

See the rest of our favourite vaporizers here.