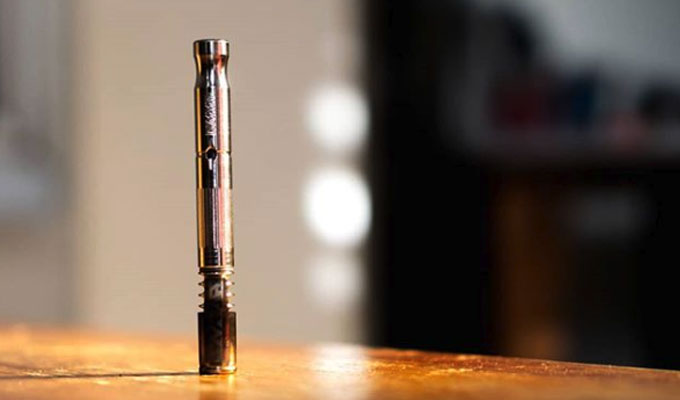 When I was a teenager I used to make my own manual vaporizers with my friends. I remember this being a fairly easy thing to do so I always wondered why I would pay over £50 for a Dynavap.

Well, the same friends I used to build custom vaporizers have recently been trying to get me to try a Dynavap device. They argue that its entry-level model the M 2019 is well worth its price tag so I decided to pay up and give it a try!

In the UK, the best options for purchase the Dynavap M 2019 include:

Both these websites are legit and because they’re both independent offer really personable customer service.

The Dynavap M 2019 implements hybrid heating which means you’ll benefit from both convection and conduction.

Vapour production was almost instantaneous. I used a little butane torch and was able to inhale thick vapour within 5 seconds; try that with an electric vaporizer!

Even if you’re using a cigarette lighter you will effortlessly be producing vapour within 15 seconds.

The oven is pretty tiny and just holds around 0.1 grams of cannabis. This may not sound like a lot but it is! The Dynavap M extracts vapour from your cannabis so efficiently you’ll find yourself getting baked off the tiniest amounts!

✔️ It’s so intuitive to use

The Dynavap M 2019 is hands down the easiest vaporizer I have ever had the pleasure of using.

The biggest disadvantage of manual vaporizers is that they usually lack the ability to effectively manage temperature and avoid overheating the oven and combusting your weed.

This is not a problem with the Dynavap M. When you apply the flame, the oven will begin to heat up. Once it reaches its optimum temperature the cap will click letting you know your herbs are ready to be vaped!

Once the temperature of the oven drops below optimal vaping again it’ll click again signalling that its time to reapply the heat.

Follow the clicks and you’ll have maximum vapour production with zero combustion!

The Dynavap M 2019 is also super easy to clean. It disassembles into five metal pieces and five silicone O-rings for easy cleaning. Even better, there are no hidden spots for gunk to build up once everything is taken apart, which is always a nice touch. You can soak the metal pieces in ISO, and wash the O-rings in soap and water.

Three things I would change about the Dynavap M 2019

❌ It could taste better

The big thick clouds produced when exhaling from the VapCap are but they taste good rather than great. By no means do they taste bad, it just isn’t as nuanced when compared to one of my quality electronic vaporizers.

If you prioritise big clouds, I wouldn’t let this put you off though. You’ll still taste your herb better when compared to smoking it.

❌ It can be a bit tiresome to use

To get the most out of the Dynavap VapCap, you’re going to have to use a proper butane torch rather than a lighter. For me personally, it’s a bit tiresome having to have a bulky torch stretching my pockets all day. An alternative could be to use a small but then it is slower and less powerful. An advantage of a manual vaporizer is supposed to be speed and power!

So, does the Dynavap Vapcap produce hits as well as an electric vaporizer?

I’m a convert! I was wrong to turn my nose up at non-electric vaporizers. They have certainly come a long way since the days of building them ourselves in my parents’ garage and it appears that the Dynavap range of vaporizers is at the top of the pile!

If you’re looking for cleaner hits that ‘the ritual’ associated with smoking, I don’t think you can go far wrong with anything in the Dynavap range; these guys clearly know what they’re doing!

The Dynavap M’s oven is tiny and as a result, the 2018 edition was incredibly messy to load if you have fat fingers like me!

They’ve improved this with the M 2019. The oven now has little teeth. All you have to do is twist the oven into your herb and it’ll just slide into you your oven – no mess and no fuss!

A key feature of Dynavap vaporizers is their carb holes. Similar to a bong, these holes allow you to control the airflow.

If you cover it, your vapour will be more intense but will likely be quite warm. Leaving the hole uncovered will cool your vapour but proportionally it’ll contain fewer cannabinoids.

The 2018 edition had a carb that was rather flat. This made it quite difficult to customize your airflow. On the other hand, the 2019’s carb is much deeper empowering its users with far more control.

As I mentioned earlier, I suffer from extreme fat and clumsy fingers. Unfortunately for me, the Dynavap is tiny! Thankfully they’ve improved the grip on 2019 making it far easier to grip.