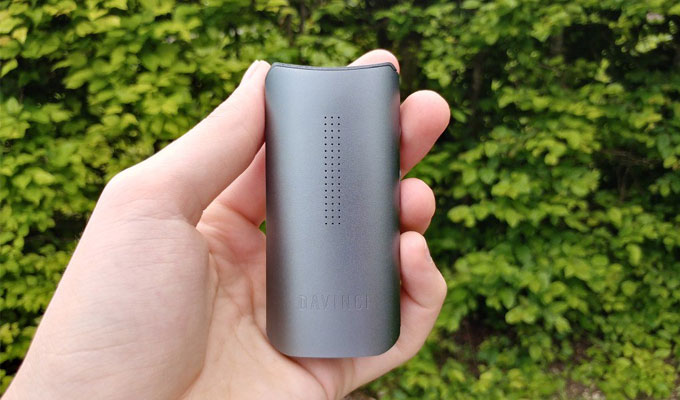 The IQ is the latest offering from Davinci. Davinci have a solid reputation for building great performing vaporizers. In fact, their previous vaporizer, the Ascent still made Vela Community’s ‘best of 2019’ list despite being nearly six years old!

The Davinci IQ is reputed to improve on the Ascent’s performance and is packed full of the latest vaping technology. However, at £210 it is considerably more expensive.

Can the Davinci IQ justify its hefty price tag? Let’s find out!

You can buy the Davinci IQ in the UK at:

✅ The Davinci IQ has ‘smart paths’

Being able to control the temperature of a dry herb vaporizer is pretty much a standard feature that you can expect from even cheap vaporizers.

The Davinci IQ has upped the ante and added the ability to create your own smart paths using an app for your Android or iOS smartphone.

Smart Path mode allows you to create bespoke vaping journeys by setting the temperature to gradually increase at a rate that you sit fit over a ten minute period.

You can save several Smart Path’s to your phone. This is useful for those of us who desire a different ‘high’ depending on the time of day. I have also created an individual path for each of my favouite strains.

I think most brands will have this feature in the next couple of years.

✅ The Davinci IQ is a sight to behold

Pax pretty much enjoys a monopoly on aesthetically pleasing dry herb vaporizers but with the IQ, Davinci is hot on their heels – it looks absolutely great.

The IQ scraps the LCD screen of the ascent. Instead, it displays useful information using a serious of 51 tiny LED lights. Similar to the Pax 3, it has an optional flat mouthpiece.

Also, IQ is surprisingly small. It measures just 9cm x 4cm making it smaller than both the Pax 3 and Crafty.

Finally, with a weight of just 142 grams, the Davinci IQ is made for your pocket. Despite its lightness, the device is solid and all the openings feel nice and secure.

✅ The Davinci IQ has a replaceable battery

Just like the Miqro, the Davinci IQ has replaceable batteries. I think I’ve said before on this blog, every vaporizer needs this!

The actual battery is impressive. It has a capacity of 3,500mAh and provides 90 mins of oven time.

The most important feature of a cannabis vaporizer is its ability to provide a good vaping experience. Luckily, the Davinci IQ does not disappoint.

The oven is fairly powerful and reaches vaping temperature inside of 50 seconds. Inside the oven is a nifty peice of innovation called ‘the pearl’ that works to evenly distribut the heat. It helps ensure you get as much out of your weed as possible.

The IQ’s has an elongated air-path that is made of ceramic-zirconium. This material transmits flavour as well as glass but has the advantage of not being fragile.

✅ The Davinci IQ has a ten year warranty.

In 2029, ten years from now, your vaporizer could die and Davinci would replace it. Need I say anymore?!

❌ The Davinci IQ has a lot of draw resistance

The Davinci IQ has a high draw resistance. It is not a vaporizer designed for huge, satisfying rips. Instead, it performs best if you take shallow sips.

This can be improved by using the extended mouthpiece and not grinding your herbs finely. However, if your herbs are not ground the vapour production suffers.

The Davinci IQ takes over three hours to charge from 0-100%. This is way longer than any other high-end vaporizer.

So, does the Davinci IQ justify its hefty price tag?

I’m going to say yes. The Davinci IQ looks great, feels great and packs a powerful performance to back it up.

On top of that, the smart paths feature is a game changer. I expect most vaporizers will be implementing this mode in the near future.

I think the Davinci IQ pips the Pax 3 in terms of perfromance. Howveer, it is also £50+ more expensive. For this reason I would still choose the Pax 3 over this device but it was close!