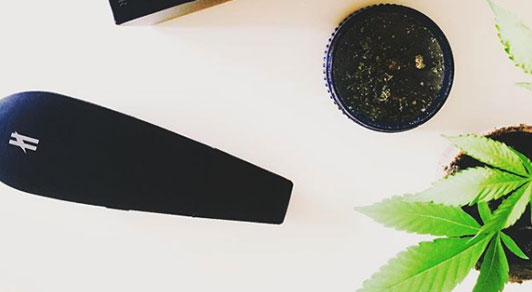 There are a growing number of weed vaporizers under £40 available to buy in the UK. This is a great price point for both those dipping their toe into vaping for the first time or even for someone who quickly needs a throwaway vape – to take to a festival for example.

I would guess that the ‘Blk’ Black Mamba Dry Herb Vaporizer is the UK’s most popular vaporizer under £40 – but is it the best?

Currently, the best UK price for the Black Mamba Vaporizer can be found at dank! and Herbalize Store.

Three things I like about the Black Mamba Vaporizer

Don’t let the price tag fool you; The Black Mamba has a surprisingly decent motor! Its oven is powered by a 2200mah battery that’ll heat up your herbs in under 20 seconds – A similar heating speed to the Pax 3 but over £100 less!

The Black Mamba is able to produce vapour so rapidly because the oven is powered by conduction technology. This means that the heating element comes into direct content with the herbs to produce vapour.

✔️ It is really easy to use

Those switching from smoking are sometimes disappointed to find that vaping requires a technique to be able to exhale impressive dense clouds, especially when using a budget vaporizer. The Mamba is a great option for a first-timer because its powerful oven produces vapour so easily.

Furthermore, the Black Mamba is operated with a singular button so it’s really easy to use too. You use the same button to turn the vape on and change temperature.

Each preset temperature has a corresponding LED. Whilst heating up, the LED is red. When your herbs are ready to be vaped the LED turns green.

No doubt, the first thing you’ll notice about the Black Mamba is its unusual shape.

Despite being under £40, the manufacturers have chosen quality materials. The black outer-case is made of a rather thick plastic making the vaporizer more weighty than you’d expect; it is not flimsy.

Inside the vape is a sizeable ceramic oven. Ceramic is a great material because it doesn’t affect the taste of your cannabis.

Finally, The Black Mamba has an air path made entirely of glass. Glass is the best material for conducting vapour.

What I would change about the Black Mamba Vaporizer

❌ It is rather high maintenance

The heat that the Black Mamba generates is nothing short of impressive but unfortunately, the heat distribution is quite poor – something to be expected from a budget vaporizer.

You’ll unlikely want a long session with this vape because the can reach a temperature just short of burning your lips!

❌ The oven is humongous

The oven size is overwhelming. To generate the best vapour, an oven needs to typically be at least ¾ full. The Black Mamba holds 0.65 grams. If you vape this much in one session, either your herbs are weak or you need a tolerance break!

However, if you vape with friends or a partner a lot – the oven size could well be a good thing!

So is the Black Mamba the best cannabis vaporizer in the UK?

To be honest, if you don’t expect too much the Black Mamba is actually a good introduction to vaping. It does vape cannabis well enough and is powerful enough to get you high very quickly. What it lacks is the polish of a more expensive vaporizer

If you have a budget of £40, then yes, the Black Mamba is a viable option but I would argue spending just £10 more which would make a respected vaporizer such as the Flowermate Aura affordable.

Due to offering great value for money, The Black Mamba made our ‘Best affordable vaporizers‘ & ‘Best Weed Vapes 2019‘ buying guides.