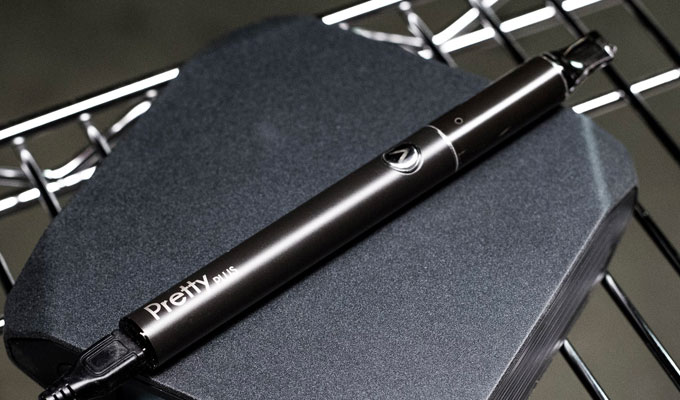 Atman is a Chinese vaporizer manufacturer that promises high-quality portable dry herb vaporizers. The brand could now be considered a stalwart of the vaping community as they’ve been in business since 2009.

The Atman Pretty Plus is their newest vaporizer. The device has had users singing praises over how sleek it looks, despite how its cheap price of just £30. Its low price point shows in areas such as its battery which has a capacity of just 900mAh. Similarly priced vaporizers such as the Black Mamba have nearly doubled this capacity.

So let’s find out if a £30 vaporizer can pack a punch!

If you’re in the market for a cheap vaporizer, you should check our list on BEST BUDGET DRY HERB VAPORIZERS

2 Things I Liked About the Vape

✅ The Pretty Plus is compact

If you’re on the market for a small pen-type e-vape, the Atman Pretty Plus could be for you.

This tiny, pen-sized vaporizer can fit absolutely anywhere because of how compact it is. The device is easy to take along with you anywhere without hassle.

✅ The Atman Pretty Plus heats up quickly

The model heats up faster than you can say its name.

To switch on, rapidly press the power button 5 times and hold until the light turns red. The colour will shift once the device gets warmer.

To play it on the safe side, wait until the LED light turns green. This indicates that the device has reached the optimal operating temperature.

At first, the battery of the Pretty Plus worked fine.

With continuous usage though, it becomes apparent that the battery is not the best for a vape this size. You can find others with a bigger capacity, but it’s decent enough. It lasts two sessions per full charge, which is great for beginners but not for the pros.

Unfortunately, as time goes on, its battery performance tapers. The more the device is used, the more users notice the declining length of their vape sessions.

This becomes a big issue for those who want to get the most out of their vapes. After all, we all want a model that lasts for years and provides many more puffs.

The biggest pet peeve users found with the Atman Pretty Plus was the lack of temperature settings they could access.

The temperatures the model can handle is limited, spanning low to medium. If set on higher temperatures, which many vapers prefer, the herbs used will turn black. This makes for an awful taste and the device becomes much more difficult to cleanout.

This limiting factor discourages users from using the Atman Pretty Plus the way they prefer to.

❌ The Pretty Plus has a flimsy mouthpiece

One of the biggest downsides that vapers attribute to this vaporizer is its fiddly mouthpieces.

The Pretty Plus doesn’t have the best seal for its mouthpiece. It tends to easily become loose even when brand new.

Since the part is made of plastic, your herbs may pick up some tastes of that unwanted flavour. Some users have even experienced this piece degrading or melting, which is a warning sign that it’s not well-made.

Although replaceable with a glass mouthpiece, that is still a hassle to do so.

Does the Atman Pretty Plus Pack a Punch?!

Although the Atman Pretty Plus does have its pros such as heating up quickly, a cool design, as well as a small body for portability – the device is just not up to scratch.

Even if the retailing price is on the lower end, the negatives outweigh the positives.

The short battery life, having only one preset temperature, how it can’t handle higher temperatures well, and even the plastic mouthpiece can cause annoyance to users for both beginners or pros.

Not to mention, the inner herb chamber was designed in such a way that the air path is painted. This makes it difficult for users to see through the heating cover since it’s covered in paint.

Overall, the Atman Pretty Plus isn’t all that. Vaporizer lovers are better off finding cheaper alternatives with better features and heat settings to suit their liking.