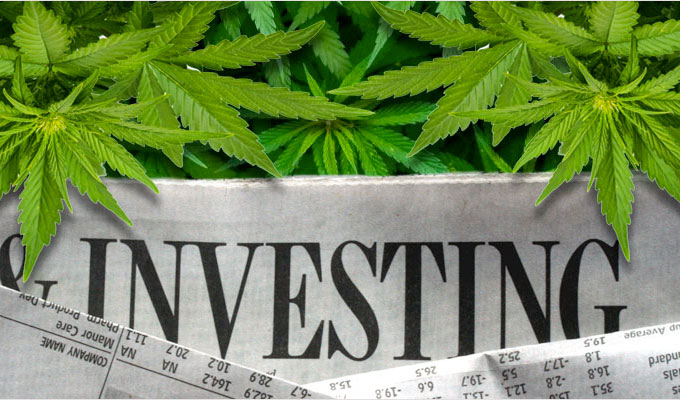 Cannabis is a hot topic right now. For the government, public, and even investors.

With a staggering global market worth of $340 billion, it’s easy to see why. To put that lofty figure into perspective, the smartphone equivalent is worth $409 billion – and smartphones are legal.

It is now possible to buy cannabis shares across all the major stock exchanges such as LSE, NYSE, NASDAQ et al. There are tons of tools available to carry this out, personally, I use Plus500.

The cannabis industry is growing – fast

Speaking of legal, the legal market for cannabis is expected to grow to $73.6 billion by 2027, according to a new report published by Grand View Research, Inc. As of now, this is the pie investors are trying to get their finger into. In fact, they’re currently leaping in before things really take off.

You see, the growing adoption of cannabis by the pharmaceutical industry means big bucks. And really, everyone (the government) are eyeing that $340 billion that’s just flowing about entirely untaxed!

With growing public backing for legalization, we’re at the precipice of ‘en masse’ cannabis legalization over the coming century or less.

Still, Canada, Uruguay, and various states throughout the US are the only areas where Cannabis consumption is fully legalized. And in these countries, a few cannabis companies stand above the rest as prominent market leaders.

These are the innovators, top-sellers, and, as you’ll see, lucrative mergers. They’ve got their finger on the cannabis industry pulse and know how to rake in the cash.

Naturally, their shareholders are quite happy. Adding to their happiness and relative market, “comfort” is that the only way is up for cannabis profits. If you’d like to join their ranks, take a look at their favourite companies below.

Cannabis companies that are worth investing in:

Situated in Ontario, Canada, you could argue that Aphria is one of the most overlooked companies by investors. This is a shame considering that it’s one of the industry’s better-run companies and has a relatively stable market track record.

In the eyes of Wall Street’s experts, APHA is one of the best marijuana stocks for 2021. Why? Just take a look for yourself.

Aphria delivered a net loss of C$5.1 million during the first quarter of its fiscal 2021, which was almost 50% better than the consensus analyst estimate. So far, they’re outdoing expectations.

And if you don’t believe the figures, you might believe analyst Pablo Zuanic who says Canadian LPs like Aphria could have “positive collateral benefits” from the US election.

This means that while federalized legalization is still some time away, the decriminalization of adult-use marijuana could lead to booming sales.

Traditionally tied to Marlboro, Altria hasn’t exactly forged a stellar industry image for itself. Being associated with cigarettes, tobacco, and other related products is never a good look. Touting its strong American heritage and its foothold in multiple markets as its biggest selling point, there’s a certain traditionalist feel to the company.

However, the mere fact that it has been around and still standing for 180 years shows endurance and grit. Or better said – the willingness to adapt.

Not doing themselves any favours, the decision was made to acquire a 35% stake in e-cigarette company Juul Labs in late 2018 for $12.8 billion. Of course, due to ongoing lawsuits and public scrutiny, Altria has yet to see much (if any) success due to this investment.

However, where they have one saving grace – cannabis.

Some of their patented technology allows users to vaporize both CBD and THC – two of the best-known cannabinoids in marijuana.

And sure enough, they’ll need to source their cannabis from somewhere.

Altria owns 45% of Cronos Group (CRON), one of the largest Canadian marijuana stocks. Moreover, it holds half of the company’s board seats. With CRON off more than 30% this year and with a low company worth of $2 billion, Altria could easily snap it up using its $7.8 billion in 12-month free cash flow to buy $100% control.

And if the company can play its cards right, expect to see tremendous growth now that Biden is president. If cannabis is legalized on a federal level, Altria’s stock will skyrocket.

Speaking of the soon-to-be market leader, Aphria, here’s a company that’s jumping on the bandwagon – literally. However, rather than any complete takeover, both companies will be merging. This means that shareholders will enjoy overnight growth in their holding from one day to the next.

The agreement will create the largest cannabis company in the world by revenue.

In the past 12 months, Aphria-Tilray generated CA$874 million in sales.

However, on their own, Tilray is up 64% and currently one of the best-performing cannabis stocks in the industry. And as you can see, the momentum is just getting started. They’re going into 2021 with the wind in their sails. Expecting to merge with HEXO (see below) – they’re one to keep an eye on.

Moreover, the best time to buy pot stocks is when they’re about to fly high due to a near-horizon catalyst. Better still is if they’re cheap. It seems like Tilray fulfils both of these criteria satisfactorily.

Ontario-based HEXO released its quarterly results for the fourth quarter boasting net revenue of 27.1 million Canadian dollars. This is a stunning 76% year over year and was up 23% from the third quarter – essentially skyrocketing.

Mainly associated with medical cannabis, HEXO is already on a lucrative path. And as you’ll see, the good brand image that comes with being aligned with the pharmaceutical industry might just be attractive to Tilray. Plus, medical-grade cannabis is by far the biggest money-maker in the industry as of now.

HEXO are currently the leading grower in the Canadian province of Quebec, with a 29% market share – that’s pretty big. They also just so happen to be Canada’s No.1 supplier of hash, which is even bigger!

But what you really want to see as a potential shareholder is growth and reliability. One look at these numbers will clear everything up!. During Q1 2021 (ended Oct. 31), the company grew its sales by a stunning 103.2% to CA$29.5 million compared to Q1 2020.

This growth could either be a miracle or the result of a well-run company knowing how to strike when the iron’s hot. I’d favour the latter cause here.

In fact, we have proof! This promising financial development came from its Truss Beverages joint venture with Molson Coors Brewing Company to develop cannabis-infused drinks. While the joint venture may have gotten its start in 2018, HEXO has only recently reaped the benefits. Their patience has proved fruitful since the growth shows no signs of slowing.

If you’ve previously dabbled in market research, Green Thumb Industries will sound familiar to you.

Established officially in 2002, they’ve cultivated a wholesome and accessible image as they deal with cannabis products and distribution in a personal and ‘human’ manner.

Green Thumb Industries is a US MSO that operates in 12 states, including California and Florida, and works with numerous top brands. But they’re not ready to just stop there. As a company, they’re continually upscaling. However, don’t let that scare you off. Green Thumb Industries makes a point of keeping their investors up-to-date on financial/stock information, company news, and their various sources.

Showing their propensity towards growth, Green Thumb has expanded its footprint in Illinois and Pennsylvania without overextending its balance sheet. It already has a sizable presence in New Jersey.

Thanks to this large-scale branching out, analyst Pablo Zuanic projects that their revenue will grow from $527 million in 2020 to $982 million by 2022.

This is the main figure that shareholders should be focusing on. While share prices are still relatively low now, if Green Thumb can maintain this growth, they’ll be worth their weight in gold in the future!

When looking to invest, it can be a nightmare trying to find a company that will make the most of your money. This riddle is even tougher to solve in the ever-changing cannabis industry where constant innovation and merging projects are evolving alongside and fast-growing market.

Fortunately, some companies stand-out as consistently reliable and are known for always making the right choice. The companies listed above are certainly of this ilk and they also just so happen to be on the right track for huge growth.

So, find which company portfolio suits you best and get investing!