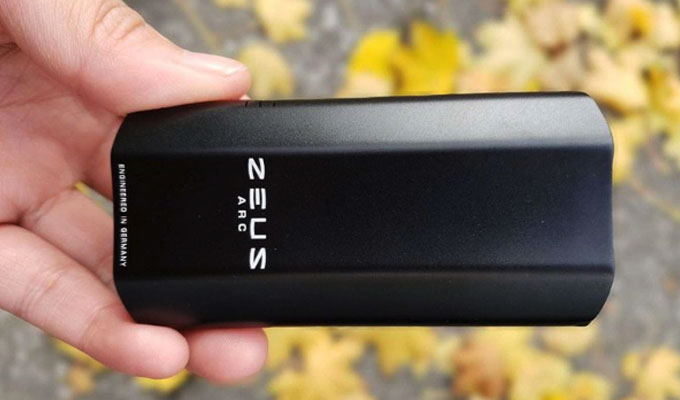 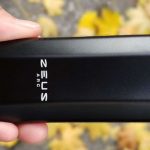 There has been a fair bit of excitement around this device since it was released six months ago. Zeus Arsenal has been creating well-received vaporizers for a number of years now but the Arc and Arc GT represent their first attempt at a high-end vaporizer that takes the likes of Pax, Davinchi IQ and the Crafty head on.

Disclaimer: I’m heading into this review rather biased. As you’ll know both the Pax and the Crafty are two of my all-time favourite vaporizers so the Arc certainly has its work cut out.

In the UK, you can buy the Arc and Arc GT from Namaste and dank!

Three things I liked about the Zeus Arsenal Arc

The Zeus Arsenal looks absolutely great. It is better looking than the Crafty, on a par with the Davinchi IQ but is probably shaded slightly by the Pax.

The entire unit is made from adonized aluminium and has a nice matte finish. The Arc is really tiny to measuring it at xcm x cm. It is marginally smaller than the Crafty and fits easily in the palms of your hands.

Based on design and aesthetics alone, the Arc is up there with the best of them but how does it perform???

The vapour production of the Zeus Arsenal is just great.

The GT stands for Gold technology and this refers to the Gold they’ve used in both the air path and heat sink. According to Zeus Arsenal, gold is one of the best materials for cooling vapour and is innovation responsible for the smooth, tasty hits that the Zeus produces.

The Arc GT is well built.

Zeus Arsenal, the manufacturers of the Arc GT claim their vaporizer to be ‘engineered in Germany’ but they do not state where it is made. I suspect China and not sure what ‘engineered’ actually means anyway?

Despite this, the Arc GT is actually built really well and has all the features and innovations you’d expect from a vaporizer of this price.

The loading area of the vape is made out of plastic. This is normally a big no for me. However, I dropped an email to Zeus Arsenal about this and they replied stating that only PEEK plastic is used. PEEK plastic is the same material used in the Crafty and Mighty and is certified to be able to maintain its integrity at temperatures up to 350c; far hotter than the Arc GT will ever get.

To check the battery life, all you need to do is shake the vape and the lights will indicate the charge left – pretty cool!

Under the hood is an accelerometer that’ll shut down the oven when it recognises the vape is idle saving precious weed and battery. and haptic feedback that’ll vibrate when your herbs are ready to be vaped.

What I didn’t like about the Zeus Arsenal Arc GT

My first session require a burn off

I could taste a slight silicone taste in my first two sessions with the vaporizer. This is probably because I did not complete a full burn off. However, I always wonder why manufacturers don’t carry out burn offs in the factory so we don’t have to. Pretty much every vape brand is guilty of this.

The Arc GT only has 3 temperature settings.

Zeus refers to their settings as ‘heating cycles’ but that’s just marketing speak. They’re bog standard temperature settings and there are not enough of them. They also start unusually high. This is great for vapour production; the device will create huge clouds. However, sometimes I like to vape on temperatures as low as 160c.

Is the Zeus Arsenal Arc GT a Crafty Killer?

I’m going to say no. Don’t get me wrong, the Zeus Arsenal is a cracking vape, it performs great and can rival even the Pax for aesthetics. However, I’m unsure why anyone would choose it over the Crafty when they’re priced similarly.

The Crafty has more features, implements hybrid heating and produces the best clouds in the uber-portable category.